I was talking to a friend of mine a while back and she was telling me about the first time she ever went down on a guy.  It was a hook up that was, frankly, uncharacteristic of her as she had intentionally (and not for religious reasons) remained a virgin into her twenties.  The unfortunate truth of this story though is that it serves to highlight some serious issues that result from boys being fucking idiots.  So picture this: after so many years of behaving, a young girl decides that she is ready to take the next step in her sexual process.  She’s not ready for intercourse, but she’s willed up the courage to try oral sex (which a lot of guys will take over sex itself on many occasions anyway!)  Imagine that she’s nervous about her performance, wanting to do well and that she won’t somehow screw it up.  Then imagine the he actually screws it up, but she has no idea because she’s never been in this situation before.

Well, how did he screw it up?

By being an ignorant, selfish fuck.  To elaborate a bit, he decided that he didn’t want to lay down in the bed, sit or otherwise make any attempt to improve her comfort.  No, he insisted he needed to be standing up, with her kneeling (on a tile floor.)  He made ZERO attempt to make her more comfortable.  Have you ever spent much time on your bare knees on a hard floor?  If not, I suggest you try it and tell me if you think this is reasonable.  Like many girls, she doesn’t have the slightest idea if she’s doing it right, but she’s doing the best she can based on what she’s heard and/or (probably not) seen (which is also typically inaccurate.)  So there she is, already uncomfortable, trying to push this guy’s member as far into her mouth / throat as she can and trying not to gag, and what does he do?  One of the things you should never do without expressed permission/consent (I only say this because I’ve met one or two ladies that LIKE this sort of treatment, but I digress…)  He put his hand on the back of her head and forced her to go deeper.  By this point I wouldn’t blame her for grabbing this guy’s balls and squeezing until he started crying, but she’s not the type for conflict, she wanted to be good for him, so she finished him despite his treatment.  And you know what?  At no point did he attempt to reciprocate (he should’ve before but more on that in a bit.)  She never played with him after that, the whole thing put a sour note on hooking up and especially blow jobs which she no desire to do again (and who could blame her?!)  Well done, asshole.

This is just an example of the broken mentality that ruins certain aspects of sexuality for some women.  So let’s break down some of the bullshit you guys are pulling and therefore screwing things up for both her and the guys later on that (unlike you) give a shit.  A lot of this can be translated to any sexual act, and I’m pretty sure it stands with guy on guy action as well.

Let’s get this out of the way first…  Somehow, at some point, the idea actually took hold that under certain (variable) circumstances, a girl “has to give you head.” I’ve heard a lot of ridiculous rules: “If you’ve had sex, she has to go down on you.” False.  “Once you get a handjob, she has to give you a blowjob next time.” False! Or the worst (and I can’t make this shit up): “If you’re making out and you know she wants it, just pull it out and push her head down.” I mean, Seriously!? People actually think like this!?  Not only is this wandering into rape world, but that girl isn’t going to want to go near yours (or probably anyone else’s penis) again.  It is REALLY worth it to put her through an awkward situation in which she’s really not going to try AND destroy any chance you have of letting it happen again?  I’m sure you don’t give a rat’s ass if she never goes down on another guy… but if you could get around your ignorant assumptions, and she actually enjoyed herself, not only might you find she’s really fantastic at oral sex, but that she might regularly offer to do so.  There’s this odd concept called “respect” that makes people more likely to want to please you.

You’re not willing to give: 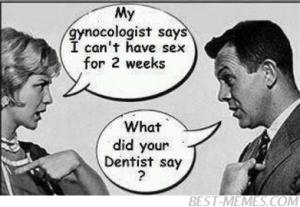 It’s absolutely magical what respectfully and tactfully asking what you want will get you.  I’ve beaten the concept of communication to death in these sex-based posts, but it’s true in every case that being willing to ask for it will let them know it’s on your mind.  If you’re already hooking up, they may think that you’re all about the sex itself and not give alternative activities another thought.  You don’t get to expect anything in regards to sexual activity, but there’s no harm in asking respectfully. (Protip: If you have trouble asking outright, playfully suggest the 69 position, if she likes that idea then obviously she’s okay with going down on you in the right situation.)  Be prepared though, if she doesn’t want to, you’re going to have to respect that.  Over time maybe you can communicate enough to understand her aversion to oral sex, but you’ll never get there if you act like a douchebag when she tells you no.  Be respectful, build trust and be patient.  Sometimes it simply boils to inexperience and and performance anxiety, which will never improve if…

You’re not willing to teach: 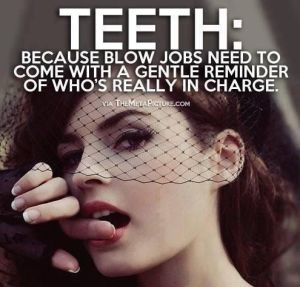 You make it uncomfortable:

This goes back to my initial story.  There are a number of other asshole moves you can pull that turn a potential positive situation into a negative one.  The thing you have to remember is that the “pleasure” of giving you a blowjob primarily comes from your partner feeling empowered in the process of doing so.  If they know they are turning you on and (eventually) getting you off, it can very likely turn them on.  However, if you ruin the fun by being disrespectful or making them uncomfortable, then you’ve pretty much destroyed the whole situation and relegated yourself to asshole land.

For example DO NOT:

Cum in her mouth without permission.  This is a common assumption and one that can really piss off somebody who’s not expecting it.  When in doubt, warn them!!  Who cares if she swallows it or not?  Sure, the orgasm will be better if she’s willing to keep going while you’re getting off, but I guarantee it’s not going to be better if abruptly stops, spits it all over you and is pissed.  That’s an excellent way to be sure you’re not getting seconds anytime soon.  (And if you get an especially spiteful woman there’s a lot of very gross/vicious ways she can punish you…   )

Push / Force yourself into her (aka “Face-Fucking”) without permission.  Look, unless you regularly shove large, long cylinders in your mouth, you’ve got no real concept of how difficult it might be for her to handle you.  (Even if you do.. everyone is built a little different.)  So in those situations, when she’s trying to handle you, don’t start shoving yourself in further and for the love of god do NOT push on the back of her head. That’s arguably one of the worst things you can possibly so, especially during orgasm.  If you pull that on somebody I wouldn’t blame her for biting your punk ass. 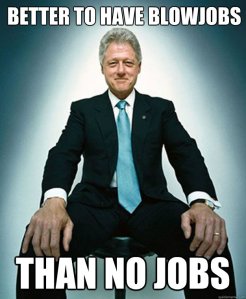 Speaking of comfort, all of the above included, it’s a basic rule of the universe that if you want something to happen you make it as easy and comfortable as possible. This comes back to the silly concept of consideration for whomever is going to give you what it is you want.  To that end, do everything you can to make them as comfortable as possible in the situation.  So that means whatever position is easiest for them and if that position happens to involve hard surfaces, get her a fucking pillow.  It’s often the little things (no pun intended.. I hope.. for your sake…) that can make or break a situation, especially one where you’re asking for a big favor.  Because you know what will screw up the chances of a perfectly good, respectful, considerate guy getting a blowjob from a girl that decides she wants to play with him?  Some asshole before him that was a selfish, ignorant, disrespectful douchebag and did all of the above.  What pains me is how many of those creatures actually exist out there.