I always told myself that when I returned here I would return triumphant.  As if I had gone off on some journey to find a great treasure (The Alchemist?) and would storm the city, riches in hand to show everyone that I had “made it.”  Granted that I have not really returned, I’m just visiting, and on some levels I HAVE “made it” compared to many who struggle on a regular basis. Regardless, maybe it’s a good place to check-in and gauge my development. 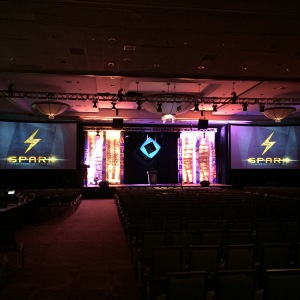 I’ve spent the last two days putting in nearly thirty-five hours of work.  My current employer specializes in live productions from concept to the show itself and every element in between.  It’s very cool, hip, artistic work and it takes a lot of skilled individuals to bring it all together.  Any of you that have ever worked any sort of production already know that the last few days coming up to the show have to potential to eat your sleep time.  Thankfully a good final result, happy clients and cool people on your team (Along with a LOT of coffee) really help you pull through when you’re on hour 17 after three hours of sleep the night before.

It’s both cool and ironic where our event was this round.  When I lived in Seattle I often thought of how cool it would be to stay in the twin towers of the Westin Hotel.  I used to come here (I’m at the Westin as I write this) with my parents every year to eat at the Japanese restaurant that served my all-time favorite food: Shabu-shabu.   It’s no longer here, but the burger bar that they added is seriously fantastic (I JUST finished it)!  This time I was on the 35th floor out of 40.  It afforded a great view and a comfortable bed.  It’s not the penthouse suite yet, but it’s a good step in the right direction.

The logistics also proved as a reminder for me.  The first night we alked a ways for a team dinner at a restaurant on 2nd and Bell in downtown Seattle.  The relevance in this is that we walked, and it took is right by a building I used to live in (3rd and Bell.)  While it wasn’t the ultimate end to that version of me, I was in one of my much darker phases while I lived there.  My ex and I were estranged, and I made a lot of very questionable choices that would be unthinkable now.  That place is another gauge for me to measure my growth since then, and it makes me grateful.

Now that my work is done I have the opportunity to spend a couple of days catching up.  Tonight is drinks with some lovely ladies I went to high school with, and tomorrow evening I will see my father (I spoke to him earlier, he’s quite excited.)  I’m not sure what it is exactly, but I like this city a lot more this time than the last time I visited.  Granted I was in Hood Canal, and not in the city except briefly, to visit.  But the city itself appeals to me more (even the solid grey sky that has re-appeared since the unusually good weather that heralded my arrival.)  I could live here again I think, the way it feels now.  That’s not to say I’m going to just yet, I will go where my path takes me and right now my place is still firmly in Orlando.  But when I’ve “made it” perhaps I will return triumphant and survey the city from my penthouse.  If I like it as much as I do right now, that’s all I would need.