There’s usually three different arguments in regards to the happenings in life.  The first goes something like “Heathen! Everything happens for a reason because it’s (**insert your god/gods/entity/demon/timelord here**) plan!” (Though if you chose timelord I can’t argue with you… because you’re awesome.)  Also in this category is “IT IS YOUR DESTINY!” type thinking.  Second is the opposite idea like “Idiots.  Nothing happens for any reason.  Our existence and everything that happens is just a random coincidence fueled by variables and probability.”  So then naturally the third possibility is the moderate approach of “Some things are meant to happen, but we have free will and can go in the direction we please.  We can make things happen, our future is yet unwritten.”  Simplified, it boils down to fate, coincidence, or a bit of a sandbox.

Some Time Lords are better than others…

Based on what I’ve written before, you can assume I’m either the first type (cycles?) or the third.  Acknowledging any real system at all basically kills option two because it disagrees with anything that indicates an organized (by what?) system. Without ranting too much about religion (because I’m just not a fan of organized religion…) I’ll go ahead and say that I don’t want to believe in option one because, frankly, it’s a terrifying prospect to simply exist with no purpose other than going through predestined motions.  Fortunately it doesn’t make a lot of sense either though.  Why would god (Timelords don’t do that anyway…) bother giving the ability to reason and be creative to drones that are simply going to run their course anyway?  For an omniscient being that’s pretty wasteful, and quite honestly a shitty system design.

So let’s go with option 3: the “sandbox”.  This essentially says we belong to a system, probably one architected by something, somewhere that we don’t and possibly can’t understand.  This is a more comforting idea for a number of reasons.  It leaves room for a naked, white-beareded, benevolent man chilling up on a cloud surrounded by little winged babies with instruments.  It also leaves room for a lizard master race that wants to use us as slaves (fortunately the time lord will probably save us from that.)  But deities aside, what makes this ideal is the fact that it leaves room for both purpose, and reason.

“Why are we here?” is one of the oldest questions out there, and lots of people (including me) think they have the reasons figured out.  But let’s try to avoid the overly-spiritual side for now and stick with the logical.  “Sandbox” logic says we exist in a self-sustaining system.  Which means, in fact, that we are a component of that system.  Could it go on without us?  Yep, it might even be better off, but it would be very very different.  A key component of a self-sustaining system is the ability to adapt.  We actually mirror that trait as self-sustaining, adapting systems ourselves.  So the basic answer is, we are here because we’re a part of an ever-adapting system, and we would continue to be, except that we have this silly free will that causes us to continuously add and change a great number of variables in this system.  The truth is that humans are really fucking things up. It should be utter chaos, and some people think it is, but it’s not really.  Instead, despite the massive disruptions we’ve caused, the system continues to adapt.  Maybe it won’t indefinitely, but for now it’s hanging in there.

But why would it?  Think about it: nature is beautiful, but it’s also harsh and unforgiving towards it’s predators.  If it were up to a mindless, instinctive system, I don’t believe humans would exist.  The only explanation is that the system was designed to allow for the bullshit humans pull.  So it becomes a matter of intelligent design (That said.. allowing humans to exist doesn’t seem that intelligent on the surface… but faith, ya know?)  But rather than shooting back to option A and saying everything is scripted (that would be really un-intelligent design…) this supports the idea that the system is set up for us, and parameters are set, but we get to navigate it the way we choose.  Some things are meant to happen on our individual paths, but if we really choose to, we can fight that… and usually face the consequences.   Consequences aren’t a punishment, it’s just what happens when you think you know what’s better for you than the supposed relatively omniscient mind that laid out your path.  The system is set up knowing that some people will always want to “fight the power”, even if it’s actually good for them.

Now (I know.. by now you’re like “Jesus.. get back to the sex posts…!”) let’s be optimistic and assume whatever charted your path did so with the idea you will experience what you need to.  The sad truth is, what people need to experience isn’t always happy.  In some cases it’s really, really fucked up.  The reasons for this on a spiritual and philosophical level could fill up a whole series of posts, but the reason for this on a logical level is pretty simple:  The system can’t support that sort of imbalance.  If nobody died, the system as it is now would crash catastrophically in a very short time.  The key element to any self-sustaining system (including ourselves) is balance.  When thrown out of balance, the system will do whatever it needs to (indifferently) to right itself.  That’s why bad things happen to good people, people die for no reason and sometimes people who really don’t deserve to get ahead do anyway.  In some way the system has to rebalance itself, and it quite frankly doesn’t care if you like how it does it or not.

But since you’re reading this, you’re one of the many who fall on the fortunate side of this system.  Thus far you might’ve had a hard path, but comparatively you are able to sit and spend time reading a blog rambling on about some obscure philosophy, so you’re not doing half bad.  Well, think of all the shit you got through to get here.  I’m willing to bet if you go only a couple years back, things have happened you never would’ve planned for.  Now if you think about all the steps that led you here, some of them made no sense at the time, and even seemed detrimental, and yet everything fell into place to get you here. 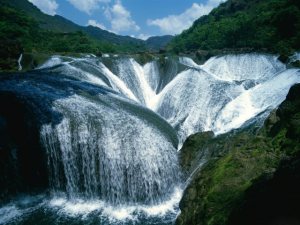 I didn’t say it would always be easy regardless…

Perhaps where you are right now isn’t where you want to be.  Well, you do have the power to change it, and you have choices as to how.  You can try to abruptly change your direction and charge another way in blind defiance, but that very rarely helps anyone.  You can swim against a river for a while if you are strong enough, but you will go farther, faster, with less effort if you go with the current.  So another option is to charge forward with the current; head down and paddling with all your strength.  This will get you the farthest, fastest.  The problem with this is that you will eventually burn yourself out, and either sink or be at the mercy of the current.  So the obvious choice to me, is to flow with the river, using your energy to keep your head up, avoid dangers and grab what you can find to help you.  The other advantage to this is that it’s the easiest way to link up with others traveling the river in the same way.

All river metaphors aside, if you choose to believe you have paths laid out for you, driven by your choices, then you will also begin to see signs that give you some hint as to which path will go where.  All those seemingly random events and choices throughout your life have magically chained together to bring you to who and where you are now.  If you’re reading this, you’re not done.  The good news is, beyond all the endless complication and self-importance humans bring to their lives, there is only one thing any of the three options I mentioned earlier expect of you.  Choose, and act.