They say that history repeats.  Well, it does.  In fact life repeats.  Over and over again.  In the creative industry there’s a joke (it’s not really a joke) that a good design is something you saw somewhere and changed just enough (I think the agree percentage is approximately 20% but don’t quote me on that) to call it your original work.  It’s fitting though because your life is currently doing the exact same thing.

Don’t get me wrong, obviously on the surface things change.  I’m not saying that whatever god you do or do not believe in is a lazy artist.  We grow, places change, faces change, everything changes.  It’s a depressing constant knowing that basically anything you love or grow attached to will inevitably end.  However, while that’s true on the surface, the truth is you’ve been doing a large number of the same things over and over again throughout these changes.  Thus is your cycles and you will repeat these cycles over and over again until you stop doing the same things, until you learn from that cycle and then break it using your newfound knowledge.  Then a new cycle with a new lesson begins and so on and so on.

Nothing circular here… carry on…

Cycles are not just personal though, they come in all shapes in sizes.  The state of our planet, even our universe and those beyond are in the mists of cycles that most people can’t even begin to wrap their head around.  The evidence is everywhere, nearly every major function of a system from life itself to the state of energy is in essence circular (if you were to chart it.)  So from massive cosmic cycles that take thousands or millions of years to complete all the way down to your own daily, weekly, monthly, yearly or decades long cycles, the world is repeating and everything you do feeds into it on some level.

Ever wonder why it’s so hard to bring about real change in the world?  Well, think about how hard it is to change one little habit about yourself, and then multiply that by over seven billion, and then factor in that you’d have to get a pretty large percentage of those seven billion on board with said change at the same time.  It’s starting to sound like rocket science, but it’s not.  But it is hard (I mean look at congress for god’s sake… and that’s only 535 people!!)  I don’t want to say it’s impossible, but I honestly can’t fathom anything short of global catastrophe (or enlightenment?) affecting a change that large.  And so many of the world’s woes that might easily be solved with our abundance of resources and technology… are not.

What I decided in my infinite selfishness is that the best thing I can do is try not to be part of the problem.  That means being actively self-aware, and trying to manage and break my own cycles in order to keep growing.  I’ve failed miserably at romance for nearly a decade, so obviously I haven’t figured that one out yet (despite having a much more solid sex life than many…) but I’ve made good progress in other areas like career development and not being an ignorant drone (always a plus.)  So in order to break your cycles and learn your lessons (hopefully gracefully) the first step is figuring out how to recognize them. 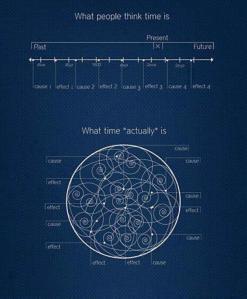 In every cycle you will find key similarities.  The trick is to ignore the surface and look for the situational similarities.  For instance, for each round of a specific cycle of my life, there is always one girl that we’ve all but agreed to hook up at some point, but due to circumstances, it never actually happens.  It’s not casual, it’s blatant, like “Well that should’ve happened right then but didn’t because… random occurrence.”   There is always that specific role that is played.  So as soon as I recognize that person, I can try to figure out what that’s trying to teach me, and carry on differently than I did before (or, if I don’t care to break that aspect of the cycle, not.)  Also, there’s always a “Jessica”, and they always play a key non-primary role in my major cycle.  This is complicated because obviously there’s all kinds of Jessicas running around in the world, but once they find their way into my world I can usually tell who it is specifically that will play that role.  Then based on that I can figure out where I am in that cycle by looking at previous events and comparing them to how things are shaping up now.

I realize that all of this sounds obscure, and a little silly, but I invite you to take a look around and recognize the similarities between what you have done and what you are doing.  Humans are creatures of habit, and it’s not simply a matter of small things like biting your nails or showering at night. When the world throws the same situations at you over and over again, and they don’t really end great, it’s really powerful to be able to realize it and choose to make a change.  That sort of awareness is what allows you to break the cycle and grow.  When you get good at recognizing them, you can choose to keep some intact and break others.  Every time you break a cycle, you create a new one and you can evaluate whether it’s good for you or not and what to do about it.

I believe this is the actual secret to success in this world.  The law of attraction feeds into this as well, since your thoughts (positive and negative) are what affect these cycles.  Those who have an abundance of money, love, power or what have you, have developed the cycles that keep bringing these things to them.  Whether they are aware of it or not, they are maintaining certain cycles while disciplining themselves to break those that go agains them.  However, sometimes not recognizing their cycles has cause these people to lose things as quickly as they gained them.  A bad decision can just as easily break a good cycle as the right one can break a bad cycle.  So think about your life, recognize your cycles and go to work figuring out what you need to do to keep the good ones and break the bad ones.  Temporarily, change can be uncomfortable and even painful, but if you understand why it’s necessary, and the good things to come, it’s a lot easier to accept.