So this year I made “goals” instead of “resolutions” because for some reason it’s gotten to the point that resolutions are synonymous with failure.  (I’m watching the population of my gym closely, it has already declined some since the year turned.)  Among my goals for this year was to make sleep a priority.  Not just any sleep, decent sleep, like several sleep cycles (which adds up to 7.5 hours with another 15 min added to wind down and actually fall asleep.)  Previously I had shot for six a night and often missed the mark, which really added up by the end of the week in terms of my energy level, mood and ability to stay awake in what are sometimes relatively boring meetings (which is an unfortunate necessity.)

Now I know some of you hard-core folk are out there doing what you do, pounding Monster energy drinks and sleeping three hours a night with the mantra of “I’ll sleep when I’m dead!!”

Well, if you’re doing that solely on principle, then fuck off.  You’re wrong. 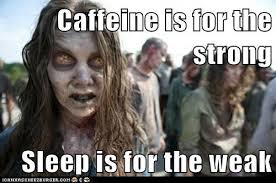 I guess you won’t sleep when you’re… undead?

I’m not going to go into the endless amount of science that says a good amount of sleep benefits you in nearly every way possible.  Nine out of ten doctors don’t do it for me either.  Doctors of what? For all we know they all have their PhD’s in English Composition (god knows we all know I don’t.. but I digress…)  What I WILL tell you is that I’ve been there, done that.  I’ve never taken hard drugs, but I’ve skimmed the surface by taking enough ephedrine and caffeine to keep me awake for three days straight until my body was literally trying to shut itself down while I was standing up at work.  I continue to use obscene amounts of coffee to make up for the hours lost hooking up on a work night, or simply playing an MMO until my eyes threatened to bleed and the sun was rising.  But just because we’re badass and can do that, doesn’t mean we should do that.  It comes down to quality of life and when it comes to living, if you believe quantity is more important than quality, I think you’re doing it wrong.

Now let’s back up a little and clarify something.  I know life happens.  I know sometimes you have to do what you have to do by working several jobs, overnight, military or caring for a newborn that doesn’t give a rat’s ass that you have to go to work tomorrow.  All those are situational life happenings that are important and can’t be helped.  I would never condemn somebody that is sacrificing for the sake of promoting themselves or those close them.  That’s life, shit happens, we do our best.  I get that.  I’m talking about those (like me) who intentionally and through lack of discipline put themselves in a position to lose what is essentially as important to your health and longevity as breathing, eating or drinking water.  Just like those things, if you don’t sleep for a certain amount of time, you’ll actually die.

When you get less sleep over time, you are damaging yourself.   Most importantly, you are actually damaging your brain. It literally kills brain cells.  The good news is your brain can heal itself to some degree, the bad news is with prolonged regular damage, there’s gonna be some lasting effects.  That’s assuming you don’t kill yourself (like I almost did) by falling asleep on the road or doing something else equally stupid.  And the icing on the cake (all of this was recently confirmed): premature aging (especially skin), stupidity (literally), decreased sex drive and (that’s right) weight gain.   Add that to the overall dramatically increased chance of death (especially through cardiovascular issues) and all of a sudden those couple extra hours of MMO don’t seem so life-changing.  I love food, video games, women, sex, alcohol and what have you, and there’s nothing with losing a couple hours form time to time to partake in all these awesome things life has to offer.  Life is about experience, so live it!  But for the love of god when it’s just another night in your everyday life, needlessly throwing away your body’s ability to fix itself from all the awesome damaging experiences is just plain stupid.  Don’t be stupid, too many humans already are. 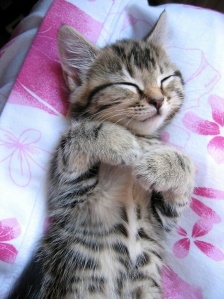 Every other animal in the world understands. Also.. baby kitten.

So then what did this goal do for me thus far?  Well, the other day I was in a six hour meeting at work to go over systems and processes and otherwise boring shit that’s essential but not boobs and explosions.  You know what?  I had a pretty good time.  Since I was well rested, I was not only not fighting dozing (which honestly sucks because you know you’re missing everything..), but I was witty enough to banter about what we were talking about and make it more fun.  Yep, sleeping made work more fun.  On top of that, my morning coffee works much better, because instead of compensating, it’s just boosting.  When it wore off, I didn’t crash, I was good.  Here’s the kicker though and it’s something I hadn’t thought about: dreams.  See before I would occasionally have a dream or two, but most times I just assumed I forgot them when I woke up.  Now I think that I just wasn’t having them.  My brain just wasn’t making it to whatever process that caused them.  Now granted I’ve been having more “Walking Dead” style dreams than anything else (hurry back!!) But even that isn’t really unpleasant because my brain has dug up all kinds of random crap I haven’t even thought about in years and it’s pretty entertaining.  I dream literally every night.  Other than reoccurring nightmares, I think most people would choose to dream rather than not… ever.   Beyond all that, I’m generally more level-headed and patient despite going through a fairly strange and isolated time in my life, so I would say this particular goal has especially good timing.  Oh, and getting enough sleep regularly also has the benefit of making it much  easier to get through days you don’t happen to get enough sleep because you’re busy being a rock star.

Having a rockstar night every night has killed or damaged many a rock star.  So, like all things, be a rockstar (or MMO badass) in moderation and get some sleep!!